On May 12th I lead a breakout session at the second European quantified self conference in Amsterdam. The goal was to exchange experiences in breath and group tracking and to demo the new, wireless version of the breathing_time concept.

I started the breakout with an overview of the previous version. We soon got into a discussion on how hard it was to control your breathing rate. One participant used an Emwave device to try and slow down his breath rate. He could never quite make the target and therefore could never reach heart coherence which is frustrating. In my view the way to go is to become more and more aware of your breathing without intentionally wanting to change it. I went from chronic hyperventilation to an average breath rate of 4 times per minute without trying. Doing daily Zen meditation for lots of years has done it for me.

As usual people saw some interesting applications for the device I hadn’t thought of like working with patient groups. Another nice suggestion was to try out the placebo effect of just wearing the cone.

When it was time for the demo people could pick up one of the breathCatchers: 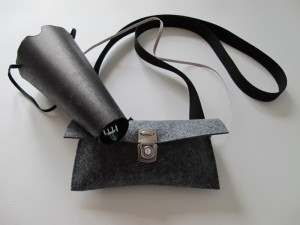 I’d managed to finish four wireless wearables. Working on 12 volt batteries with an Xbee module and an Arduino Fio for transmitting the data.

After some exploration we did two short breathing sessions so we could compare. The first was to just sit in a relaxed way and not really pay attention to the breathing (purple line). The second was to really focus on the breathing (grey line). The graph below shows the results:

Participants could look at the visual feedback but I noticed most closed their eyes to be able to concentrate better.

The last experiment was the unified visualisation of four participants. I asked them to pay close attention to the visualisation which represented the data as four concentric circles. A moving dot indicates breathing speed and moves depending on the breath flow. 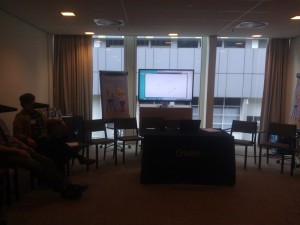 It was fascinating to watch as the dots were moving simultaneously a lot of the time. However when asked how this session was experienced most participants saw the exercise as a game and were trying to overtake each other. They used “breath as a joystick”, to quote one of them. This was not my intention, the focus should be on the unifying aspect. I got some nice suggestions on how to achieve this: give more specific instructions and adapt the visuals to split the personal and communal data.

All in all we had a very good time exploring respiration and I’m grateful to all of the participants for their enthusiasm and valuable feedback.